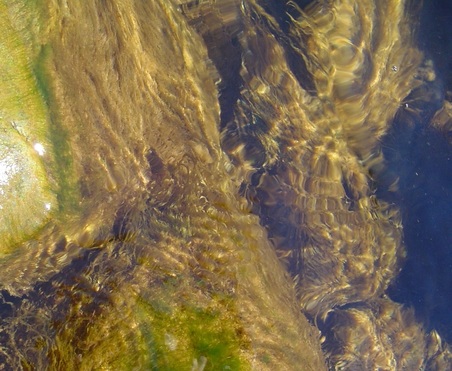 Algae in the river
Low volumes of water in the Englishman River are also a major concern, when the demand for water is at its highest, the river flows at typically at the lowest. Low flows in the Englishman River have several implications for drinking water supplies, the ecosystem and recreational uses. Firefighting demands require considerably higher volumes of water than regular domestic requirements. If a large fire were to occur during the dry summer season, the water system may not have the capacity to meet the demand.
Temperature of the Raw Water Supply is a critical factor in drinking water distribution. According to BC and Canadian standards a temperature of less than or equal to 15 degrees Celsius is required for water to be used for drinking. This summer the Englishman River water temperature was up to 24 degrees. 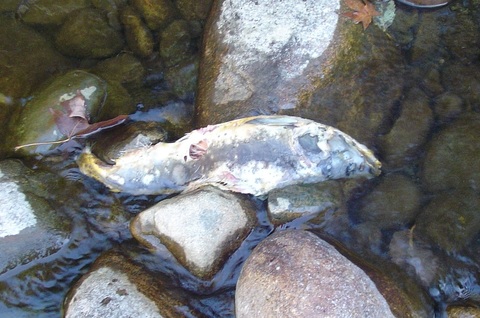 Thousands of salmon spawn and decompose upstream of the new intake
Low river flows can negatively affect fish and other aquatic species. Most fish species present in our rivers have a fine tolerance to water flows, temperature and quality. High mortality can occur when the limits are exceeded.
For some species the Maximum Daily Temperature should not exceed 15 degrees Celsius.
The maximum spawning temperature should not exceed 10 degrees Celsius and the preferred incubation temperatures should range from 2 to 6 degrees Celsius.
Low flows are also associated with low oxygen levels which can be fatal for young fry.
​
A gauge that measures river flows is located upstream of the present water intake from the river. The natural flow in the river can be augmented by water released from Arrowsmith Lake dam about 25 kilometers upstream. The original licence called for a preferred rate of 1.6 cubic meters per second to be measured at the gauge. This year the measure flow was about half that rate. As the proposed new intake will be moved upstream of the existing flow gauge the extraction will result in even lower flows than this summer.

Click the drip to link to the gauge
//wateroffice.ec.gc.ca/report/report_e.html?type=realTime&stn=08HB002    ​
Development of land dramatically reduces natural infiltration of water into the land. Reduced groundwater levels, caused by draining water off the land, hard impervious surfaces and groundwater extraction from wells create a hydrologic imbalance. Rivers and creeks that historically received groundwater interflow from surrounding land, start to discharge water into the ground surrounding the river.